I thank God that I could shake off the pain in my foot. The problem was not my foot, but the tibialis anterior which is this muscle.

And as the picture indicates, may actual problem was at X on the diagram. It’s uncanny that you press there and feel the pain in your foot!

So with some heat and taping and pressure, it feels a lot better. So, Daily World Chandigarh Marathon, here I come.

But man, it is hard to find time to do the distance required for a marathon. This week I aimed for and hit 65k even though I had to do a Saturday night 20k run, in a garden (because I do not trust the Saturday night traffic) doing approximately 36 rounds of the 500-meter track. And even though a big part of the fun of running lies for me in exploring new routes, I realized that I would be able to do one of those 12-hour or 24-hour stadium challenges. This 20k had to happen in the night because the morning was taken up by a lovely relaxing 40k countryside cycle ride with some of my colleagues.

This morning I met Amit Kumar (he ran 188 km in 24 hours last year) at the lake before the marathon promo run and we planned for the Mumbai stadium run on 10 June this year. Let’s see if that will work out.

But first the Daily World Marathon. I simply cannot live without a good challenge. As some of you may know, it is hard to qualify for the Boston marathon. This year, I think I have a good chance of doing it. Not that I want to go to Boston for it. It is just the idea. 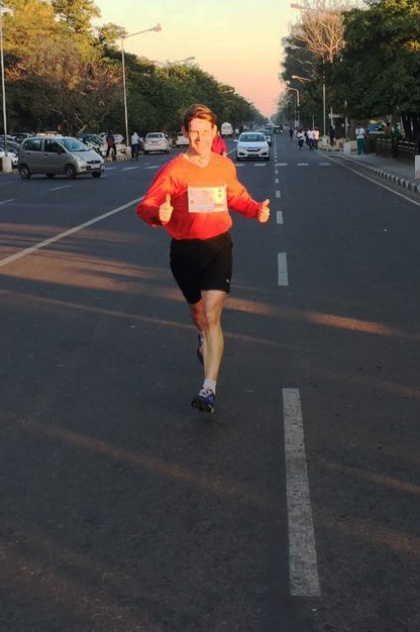 Come and join me in Chandigarh on 9 April for the Daily World Chandigarh Marathon. They also have a half marathon and a 5k. From the looks of it, it will be huge. I am part of the planning committee and my job will be to place the kilometer markings. (Probably because I complained too loudly about it when I was a pacer for the Patiala marathon!)