My regular running-buddy and I invited another guy to join us. We wanted to impress him with the joys of running so took him to our favourite route through the forest behind the lake. Soon I discovered my mistake.

We came to the forest at a good, steady pace like the seasoned and savvy runners we wanted to portray.  Casually chatting about pb’s and longest runs and that sort of  thing we ran into a minefield.

It was the time of the flying worms. Once a year thousands of tiny worms suspend themselves by threads from the trees and hang at various heights above the ground. Most of them hang just about at eye-level. Either that or they were the ones we most often spotted. 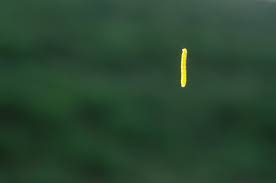 What ensued must have been hilarious to watch if there were any spectators (which thankfully there weren’t). The problem was that you could not see them until the very last moment, by which time drastic measures were required. Between ducking and dodging, shrieks and shouts there was no time for conversation or anything else.

It was some of the most fun I’ve had running.

Afterwards, sitting on the couch in our living room with a glass of water, I discovered how ineffective all the aerobics were to avoid the little buggers. I found several worms on my clothes.

And my wife found one in my hair.

One thought on “Worms”