Comrades 2006 was my only Comrades because we came to live in India the next year. I still feel that it was one of the best races I ever ran, completing the 89 kilometers in 8 hours and 54 minutes with a steady pace of 6 minutes per kilometer. 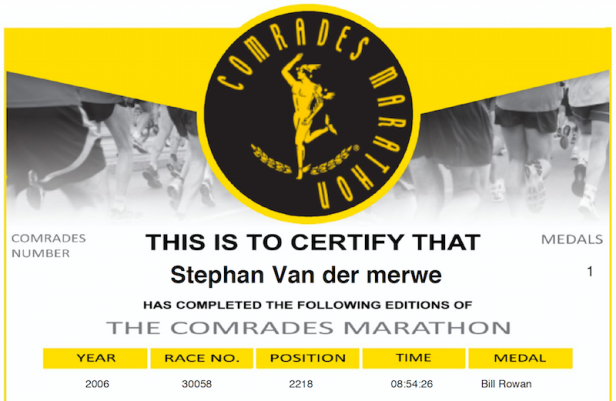 Here are some of the things that went right

With a marathon or ultra-marathon there are many things that could go wrong and a small mistake could have a big impact. Something like eating too late or too much before the race could make you lose your breakfast and a lot of energy. Pushing too hard or too fast or not stretching sufficiently during the build-up could leave you injured or sick. Then there is starting too fast or too slow or wearing clothes that chafe or shoes that don’t fit right. Even tying your shoes too tightly or not standing in the loo queue early enough could cause damage to your time or your chances of completing.

I have been asked to be a pacer or the 4:15 bus at the Patiala marathon on 9 October. It makes it all the more important for me to get it right this time. A few things that will make it easier: the route is absolutely flat.  We start at 5 in the morning so that we will be done before it gets too hot. I initially planned to go for 3:35 so 4:15 should feel comfortably slow.  BUT… one never knows what will happen.

It feels like I may have a cold coming in, but I asked my Friend to protect me against getting sick at this crucial stage of preparations. I also have a minor pain in one of my toes. I am hitting 70k this week for the first time since I have been preparing mostly for half marathons for the last 4 months. Will it be enough?

For first-time marathoners a few tips: (not comprehensive, there are many other lists for that available online)

One thought on “How to reach your marathon goal”